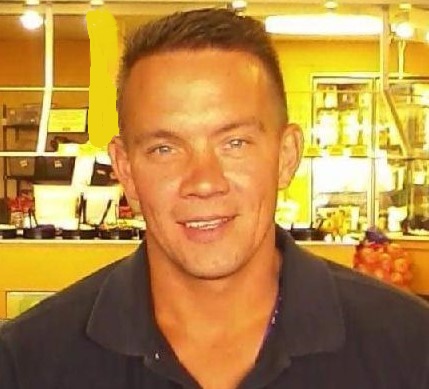 David Keith Duffy II, of Evansville, IN but longtime resident of New Haven, IL passed on this life August 20, 2021 at his home.  Davy as most knew him was born in Eldorado, IL on October 28, 1976 to David Duffy and Jackie (Armstrong) Duffy.

Davy graduated from Gallatin County High School where he was a good athlete, as some of his friends have said anything in sports he could do well, was known for ATV and motorcycle riding.  He was always polite, happy and had the biggest contagious smile you have ever seen.  He was working at Anchor Industries in Evansville and was a car salesman for many years.  He will be missed by many.

Visitation for Davy will be on Thursday, August 26, 2021 at the Cox & Son Funeral Home in New Haven, IL from 4:00 PM to 7:00 PM.  His funeral mass will be on Friday, August 27, 2021 at the St. Kateri Catholic Church in Ridgway at 11:00 AM with Fr. Vincent Mukasa and Monsignor Joseph Lawler con celebrating mass.  He will then be laid to rest in the St. Patrick Cemetery in Ponds Settlement community East of Ridgway.

Memorial contributions in his memory can be made to the St. Patrick Cemetery or Donors Choice.  You may leave a note of comfort to the family at www.coxandson.com

To order memorial trees or send flowers to the family in memory of David Duffy, II, please visit our flower store.