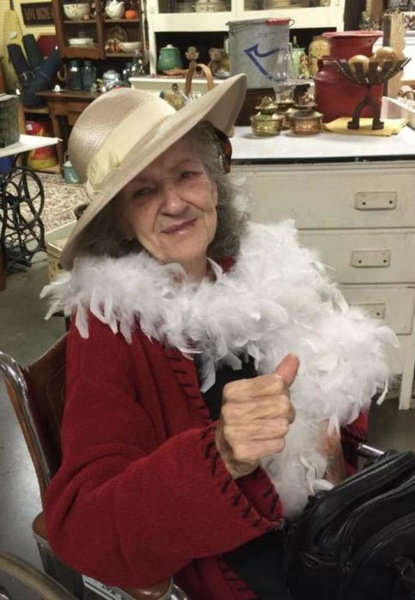 Anna V. Walker, age 83 of Shawneetown died peacefully on Wednesday, February, 26, 2019 at the Wabash Christian Village in Carmi. She was born on August 29, 1935 in Cave-In-Rock, IL. Not only was she a member of The Church of God in Shawneetown, but she was a woman of God. She would spread her love for the lord by serving her family. Her family was the apple of her eye. In her spare time, she enjoyed dancing with her grandbabies and spending time in her garden. She was a spark of joy to be around and her presence would light up the room. Her soul was gentle and caring, just as her hands. Anyone that was blessed enough to know her was promised with a smile. Anna is survived by six children, Jim, Andrew and Mark Bonneville of Shawneetown, Laura Bergeron of Omaha, Pam (Jim) Reed of Mt. Carmel and the late Mary Walker, three siblings, John Wolf of Tennessee, Leonard Wolf of Shawneetown and Helen “Cricket” Jansen of Indiana, eighteen grandchildren, thirty-one great grandchildren, one great great grandchild and one sister in law, Charlene Wolf. She is preceded in death by her parents, Alva and Anna (Milligan) Wolf and siblings, James “Speck” Wolf, Shelby Baldwin and Alva Wolf, Jr. Visitation for Anna will be on Thursday, February 28, 2019 from 4:00 PM to 7:00 PM at the Cox & Son Funeral Home in Shawneetown. Her funeral service will be held on Friday, March 1, 2019 at the Shawneetown Church of God at 11:00 AM, where she will lie in state from 10:00 AM to funeral time. Her minister, Rev. Randy Vaughn will officiate and she will be laid to rest in the Westwood Cemetery in Shawneetown. You may also obtain a memorial or send words of comfort to the family at www.coxandson.com

To order memorial trees or send flowers to the family in memory of Anna Walker, please visit our flower store.