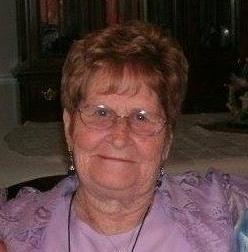 Betty C. Martin, age 83 of Norris City, IL but formerly of New Haven passed on this life, Wednesday, August 23, 2017 in the Ferrell Hospital, Eldorado, IL.    Betty was born on January 6, 1934 in Enfield, IL to the late Dallas and Lula (Baker) Erwin.  On August 23, 1951 she married Walter “Salty” Martin who preceded her in death in 1986.  Betty was a homemaker most of her life as family was always important to her.  She loved to go camping, horses and knitting.  She had beautiful smile for you when saw her and will be missed by many.

Betty is survived by 3 Sons, Rick (Marcella) Martin of Albion, IL, John and Alan Martin both of Logansport, IN and a daughter, Susan Durham of Evansville, IN.  She is survived also by 30 grandchildren, 18 great grandchildren and 15 great great grandchildren.  She also leaves behind her sister, Carolyn Fenstermacher of Mississippi.  Betty is preceded in death also by her 2 sons, David and Jim, a sister Margaret, grandson Jay and granddaughter Brenda.

Visitation for Betty will be Friday, August 25, 2017 at the Cox & Son Funeral Home in New Haven from 12 noon to 2:00 PM.  A graveside service will follow at the Union Ridge Cemetery near New Haven where she will be laid to rest next to husband and son.

Cox & Son Funeral Home is entrusted with the arrangements where you can leave a note of comfort to the family at www.coxandson.com

To order memorial trees or send flowers to the family in memory of Betty C Martin, please visit our flower store.
Send a Sympathy Card