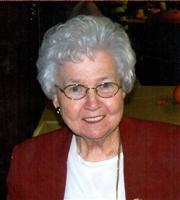 Betty J. Seely, age 88, resident of Ridgway in the Pond Settlement community, died Wednesday, December 28, 2011 in Evansville, IN. Betty was born on the family farm about 5 miles east of Ridgway on June 25, 1923 to the late John and Hannah (Doherty) Duffy. She graduated from Ridgway High School in 1940 and then on December 31, 1942, in Jackson, MS, married the late Ernest T. Seely, Sr. Betty and Thad as most knew him farmed all their lives on the family farm, Betty also worked as a secretary in the insurance industry. Betty was always an active person, as she was a member of the Daughters of Isabella, the Gallatin Co. Home Extension, the Altar Society, Women's Auxiliary of the Ridgway American Legion, Gallatin County Historical Society and the Golden Circle in Ridgway. She was a very faithful member of the St. Patrick's Catholic Church in Pond Settlement where she raised her family. Betty was a wonderful wife, mother, grandmother, sister and friend and will be greatly missed in our area.

Visitation for Betty will be at the Cox & Son Funeral Home in Ridgway, on Friday, December 30, 2011 from 4:30 PM to 8:00 PM where a prayer service will be said at 4:30PM. Funeral Mass for Betty will be on Saturday, December 31, 2011 at St. Patrick's Church, Pond Settlement at 10:30 AM with her nephew, Monsignor Joe Lawler celebrating. Interment will follow in the church cemetery.

In lieu of flowers the family asks for donations to be made to the Golden Circle in Ridgway or to the St. Patrick's Cemetery

To order memorial trees or send flowers to the family in memory of Betty J. Seely, please visit our flower store.