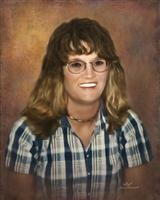 Betty J. Smith, age 43 of Old Shawneetown, died Wednesday, January 26, 2011 as a result of an automobile accident. Betty was born in Eldorado, Il on May 8, 1967 to Eugene and Mary (Tarrence) Sharp. She was married to Dennis Smith who preceded her in death in August of 2010. Betty had worked many years at Jones Farm Store in Shawneetown. She was a good mother, wife, daughter, grandmother and sister. She will be missed by the community

Funeral for Betty will be on Saturday, January 29, 2011 at the Cox & Son Funeral Home in Shawneetown starting at 2:00 PM. The family will receive friends after 11:00 AM and interment will be in Callicott Cemetery east of Ridgway. Rev. Bob Powell will officiate.


To order memorial trees or send flowers to the family in memory of Betty Smith, please visit our flower store.