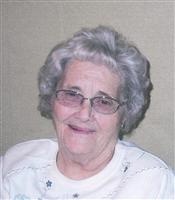 Beulah Harrelson, age 81 of Junction, Il died peacefully Wednesday, May 5, 2010 at the Fountainview Nursing Home in Eldorado. Beulah was born on July 19, 1928 in Junction to the late Raymond and Ethel (Parker) Kanady. She was married to Ralph Brannon on Sept. 11, 1947, he preceded her in death, she then married Rufus ""Pos"" Harrelson and he also preceded her in death. Beulah loved the outdoors, watching the birds and wildlife, and her dog was her very special friend. She was a faithful member of the First Baptist Church in Junction. Beulah was a good mother, wife, grandmother, sister and friend, she will be greatly missed by the community. Beulah is survived by, a daughter and son in law, Sue(Allen) Steele of Shawneetown, brother, Raymond ""Wimp"" (Phyllis) Kanady of Junction, sister, Maxine Hise of Junction, daughter in law, Cathy(Gary) Flahardy of Shawneetown, 3 grandchildren, Becky Smith, Jason Brannon and Kasey Brazier. 5 Great Grandchildren, Makalyn Smith, Jasie and Mason Blair, Logan Brannon and Carson Brannon. She was also preceded in death by her son Bill Brannon. Services for Beulah will be Saturday, May 8, 2010 at the Cox & Son Funeral Home in Shawneetown starting at 2:00 PM. The family will receive friends at the funeral home after 11:00 AM until funeral time on Saturday. Rev. Roy Dale Orr will officiate and interment will be in the Elmwood Cemetery near Equality. In lieu of flowers you may make a contribution to the First Baptist Church in Junction in her memory.

To order memorial trees or send flowers to the family in memory of Beulah Harrelson, please visit our flower store.
Send a Sympathy Card