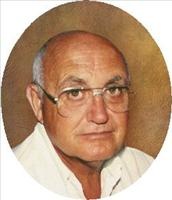 Billy L. ""Bill"" Medlin, age 78, passed away Saturday morning, August 23, 2008 in Deaconess Hospital in Evansville IN.
Bill as most knew him was a lifelong resident of New Haven other than his military life in the Air Force. He was born in New Haven on June 26, 1930 to Dorcie and Marie (Givens) Medlin. On November 15, 1952 he married Zella (Desper) who survives.
Bill served his country in the U.S. Air Force and was stationed in Roswell, NM. He came back to New Haven with his wife Zella to look after the family farm, farming was Bill's real passion in life. Over the years Bill was very active in the community and county, he was a School Board member at the Ridgway School for many years, a Farm Bureau Board member, and a FSA board member. He sold Pioneer seed for many years, and his favorite color was John Deere Green. Bill was a member of the Presbyterian Church in New Haven where he was a Deacon and Elder, he was a member of the New Haven Masonic Lodge, and was a Ainad Shriner. Bill was a huge St. Louis Cardinal fan, with this year being the first year in over 60 years that he did not attend at least one of their games. Since retiring, Bill and Zella enjoyed traveling over the years, where they have enjoyed many foreign countries.
Bill is survived by his wife Zella of New Haven, IL., a son and daughter in law, Butch and Debbie Medlin of Omaha, IL., a daughter Cathy Medlin of Harrisburg, IL, Granddaughter, Ashlee and Chris McCure and grandson Chay Naas, a sister Mary Medlin of Louisville, Ky
Bill was preceded in death by his parents along with a son Russell Medlin and a daughter, Connie Medlin Naas.
Visitation for Bill will be Sunday, August 24, 2008 from 4 to 8 pm at the Cox and Son Funeral Home, in New Haven where Masonic Rites will be conducted at 7 PM.
Funeral Service for Bill will Monday, August 26, 2008 at 11:00 AM at Cox and Son Funeral Home, with Rev. Bob Phillips officiating.
Interment will be in the Union Ridge Cemetery near New Haven, IL.
In lieu of flowers the family ask that donations be made to the Arthritis foundation, envelopes will be available at the funeral home.

On line condolences can be sent to the family at www.coxandson.com


To order memorial trees or send flowers to the family in memory of Bill Medlin, please visit our flower store.