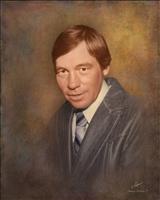 Bobby owned and operated a very successful industrial painting business for many years in Arizona before retiring and moving back to the Shawneetown area. Bobby was always happy to be around his friends and family; he loved to visit and cut up with everyone. He loved to fish, hunt, garden, and was a big Nascar fan. He greatly loved his church and to help those in need. He served on the Mammoth Town Council in Arizona for 10 years. He was a faithful member of the Junction First Baptist Church. Bobby was a good husband, father, brother, uncle, and friend. He will be missed by our community. He enriched the lives of everyone he touched with a zest for life, helping others, and love for Christ.

A memorial visitation and service will be held on Saturday, July 25, 2009 at the Junction First Baptist Church, Junction, IL. The family will receive friends starting at 3:00 PM and the service for Bobby will begin at 6:00 PM. The Rev. Roy Dale Orr will officiate.

In lieu of flowers the family ask donations be made to the Junction First Baptist Church.

To order memorial trees or send flowers to the family in memory of Bobby R. Rash, please visit our flower store.