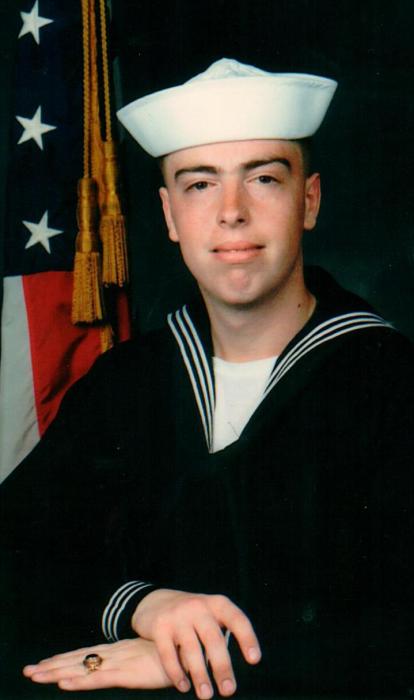 Brett  Matthew Williams, age 45 of Eldorado, IL passed on this life, Saturday, November 11, 2017 in Marion, IL.  Brett was born on September 5, 1972 to Charles Williams (formerly of Galatia) and Esther Steele (formerly of Ridgway).  Brett graduated from Pontiac Township High School in 1991 and joined the Navy in 1992.  He served his country in the Navy until 1996.  He served in Desert Storm aboard the U.S. Sacramento which was part of the U.S.S. Kitty Hawk’s Battle Group.

Brett held a brown belt in martial arts, enjoyed camping, hiking and traveling.  He had been to most of the United States.  Brett was a smart, polite, kind and good-hearted person, but his real love was cooking where he cooked in many soup kitchens and shelters helping others.  He will be remembered for his compassion of others.

Brett is survived by his mother, Esther Steele of Eldorado, 3 uncles, John (Diane ) Steele, Alan (Sue ) Steele and Glendal Steele along with many uncles and aunts on his father side, cousins and friends.  He is also preceded by his maternal grandparents Matthew and Opal Steele of Ridgway, IL and paternal grandparents,  Ralph and Effie Williams of Galatia, IL and a Uncle Ivan Steele.

A memorial service honoring his life will be on Thursday, November 16, 2017 at the Cox & Son Funeral Home in Ridgway starting at 2:00PM.

To order memorial trees or send flowers to the family in memory of Brett Matthew Williams, please visit our flower store.
Send a Sympathy Card