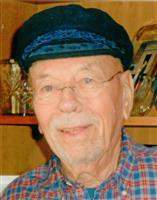 Carl E. Foster, age 89 Years, 11 Months and 19 Days old, lifelong Ridgway farmer, died peacefully at his home on Thursday, August 06, 2015. Carl was born on August 17, 1925, on the family farm east of Ridgway to the late Lane and Mayme (Barnett) Foster. Carl attended Inman primary school and Ridgway High School. Carl left high school early to join the Navy Air Corp during World War II, where he served as a Radio Airman, and sang in the Blue Jacket Choir. After World War II, Carl attended the University of Illinois on the G.I. Bill and received his Bachelor's Degree in Agriculture. He returned home and formed a farming partnership with his father; then he went out on his own, forming Foster Farms and eventually purchasing the family Centennial Farm in 1987. Carl married the love of his life, Robyle (Williams) Foster from Carmi, in 1954. They have been blessed with 61 years of happiness together. Carl enjoyed farming, selling seed corn, leasing and pumping oil wells, but most importantly he loved and was proud of his family. He was a member of the Ridgway Methodist Church, Ridgway American Legion VFW, Ridgway Masonic Lodge (Worshipful Master), and Lion's Club. Carl is survived by his wife Robyle W. Foster of Ridgway; his son Judge Thomas (Sheila) Foster of Ridgway; his daughter, Rachel R. Foster of Madison, Wisconsin; two granddaughters, Murphy and Carly Foster of Ridgway; two sisters, Florence Wilson of Ridgway and Kay Champion of San Jose, CA. He was preceded in death by his parents; a sister, Pearl Miner of Ridgway; and a brother, George N. Foster of Champaign, IL. Visitation will be on Sunday, August 9, 2015 from 4:00 PM to 8:00 PM at the Cox & Son Funeral Home in Ridgway, with his Masonic rite being conducted at 6:30 PM. The funeral service will be on Monday, August 10, 2015 at 10:00 AM at the funeral home; and interment will follow at Asbury Cemetery, northeast of Ridgway. Military rites will be conducted at the gravesite by the Ridgway American Legion VFW and the Military Honors team. In lieu of flowers, the family requests donations go to the Ridgway Methodist Church or the church's Friends of Jesus Food Pantry located in Gallatin County. You may leave a note of comfort for the family at www.coxandson.com.

To order memorial trees or send flowers to the family in memory of Carl E. Foster, please visit our flower store.