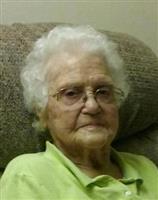 Catherine A. Upton, age 94, New Haven, Illinois oldest resident passed on this life on Friday, March 25, 2016 in the Mt. Vernon Nursing and Rehab in Mt. Vernon, IN. Catherine was born in Epworth, IL on December 10, 1921 to the late Luther and Rosa (Bates) Adams. On October 30, 1939 she married Charlie Upton who preceded her in death in 2006 after nearly 67 years of marriage. Catherine loved to watch TV, especially Jeopardy, which would seldom miss. She was known for her cooking especially homemade candy. Catherine was a joyful soul who always had a smile and kind word for you. She was a wonderful wife, mother, grandmother, sister and friend and will be missed by many.

Catherine is survived by her 2 daughters, Leslie (Corky) Merritt of New Haven, and Sue (Don) Mowry of Cincinnati, OH. 9 Grandchildren, Whitney, Chelsea, Eric, Heidi, Leonard, Debbie, Robin, Holly and Michelle. 14 Great Grandchildren and 4 Great Great Grandchildren. She is also survived by a brother, Russell ""Buck"" Adams of Carmi, IL and a sister, Rosalea Bloomer of Godfrey, IL. Catherine was preceded in death by her parents, husband and sons, Fred and Kirby Upton and a brother, Sparky Adams.

Visitation for Catherine will be on Tuesday, March 29, 2016 at the Cox & Son Funeral Home in New Haven, IL from 11:00 AM to 12:45 PM. A graveside service will immediately follow at the Union Ridge Cemetery near New Haven starting 1:00 PM.

To order memorial trees or send flowers to the family in memory of Catherine A. Upton, please visit our flower store.