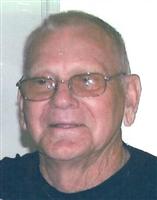 Charles S. ""Charlie"" Stacy, age 79 lifelong resident of Shawneetown died peacefully Sunday, January 20, 2013 in the Ridgway Rehabilitation and Nursing Center. Charlie as most knew him was born in Gallatin County on March 2, 1933 to the late Sherman and Nell (Thompson) Stacy. In April of 1961 he married the love of his life, the former Donna (Caldwell) who preceded him in death in 1998. Charlie served his country in the Army during the Korean War. He was a retired Coal Miner. He was a 32 degree Mason and a member of the Equality Masonic Lodge. Charlie loved to be outside riding his 4 wheeler, hunting and doing woodworking. He had been Deputy Sheriff, a Democrat precinct committeeman for many years as he loved politics. Charlie was a good husband, father, grandfather and brother and will be missed by many.

Charlie is survived by 1 daughter, Michelle & Mike Johnsey of Elizabethtown, IL, 1 granddaughter, Dakota Krikie, 2 sisters, Ruby Micas of Ridgway and Twilla Miner of Omaha, Il. He was preceded in death also by a brother Bob Stacy and a sister Virginia Sparks.

Visitation for Charlie will be on Tuesday, January 22, 2013 at the Cox & Son Funeral Home in Shawneetown from 11:00AM to 1:00 PM. His funeral will begin at 1:00 PM on Tuesday with Rev. Jack Hall officiating and interment will follow with military rites.

To order memorial trees or send flowers to the family in memory of Charles S. Stacy, please visit our flower store.
Send a Sympathy Card