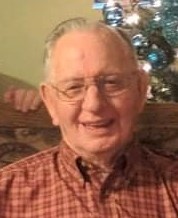 Clifford Dale Ozee, a long-time resident of the Gallatin County area, joined his Heavenly Father on July
19, 2021.
Clifford Dale was born May 19, 1934, on the farm in the Bowlesville area, the seventh child to Alvin and
Edna (Patton) Ozee. Of humble beginnings, Clifford Dale valued family and hard work to achieve his
dreams. He insisted on integrity and fairness to all. His hand shake was as strong as his faith, “boulder
sized Mustard seed”, as stated by a friend. He served his country proudly in the United States Army as a
Sp 4 from 1957 to 1959.
Upon returning from the service, this man of many talents was a meat cutter, heavy equipment
operator, truckdriver, fluorspar miner, farmer, welder, logger, and a steel guitar player. Music was his
passion. Over the years he played with many musicians and local bands, Sounds of Country and his final
performances were with Sounds of Country Gospel.
Clifford Dale was a loving father, grandfather, great-grandfather, and friend. He loved his family and was
very proud of all of their accomplishments.
He leaves behind the mother of his children Claudine Ozee of Elizabethtown, daughter Renee (Dale)
Patton of Elizabethtown, grandchildren Brandy and Blake, and his great-grandson Bradley Wayne
Patton, daughter Mechele Hall (fiancé Doug Hale) of Harrisburg, grandchildren Carley and Mason Hall.
In addition, Margaret “Marg” Hendrix of Ridgway, his best friend and in his words, “the best thing that
ever happen to me”. Bonus sons Charlie Hall, Beecher and Mark Williams, a bonus grandson John
Langan, his baby brother Walter “Tom” (Linda) Ozee and many nieces, nephews, and a multitude of
friends.
Clifford blessed many with his generosity throughout his 87 years. He never met a stranger and insisted
on truth and honesty. Those who knew Clifford Dale knew that he was not afraid of death and strongly
believed in Heaven. He would always say, “I’m too mean for the ole devil and the good Lords’ not ready
for me yet.”
There will be a private burial per his request, but the family would be honored if all family and friends
would join them on Saturday, July 24th at 11:30 AM at the home of Dale and Renee Patton for a
celebration of life to honor his memory. Food will be served, bring your chair.

Memorial contributions can be made in his memory to:

To order memorial trees or send flowers to the family in memory of Clifford Ozee, please visit our flower store.