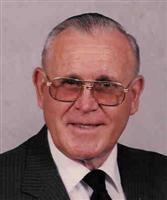 On March 26, 1946 he was married to Flossie (Pettyjohn) who preceded him in death in 1999. Clyde was an Army Veteran serving his country proudly in World War II. He served in North Africa/Italy/Anzio, he was a combat engineer with 5 Battle Stars and the WW II Victory Medal.

He retired in 1980 and pursued his passion of Gardening. He was well known throughout the community for his wonderful vegetables. He loved to visit with his friends, fish and always had a smile for you.


To order memorial trees or send flowers to the family in memory of Clyde Acord, please visit our flower store.