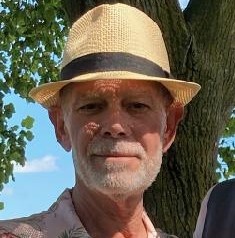 Dana A. Wargel, age 66 lifelong Ridgway resident passed on this life at his home, surrounded by his family on September 9, 2021.  Dana was born in Springfield, IL on August 18, 1955 to the late Eunice Louise (Pitt) Bullock and James Albert Bullock. In 1958 he was adopted by Mary C. (Daily) Wargel and John M. Wargel who preceded him in death.   On October 5, 1985 he married the love of his life, Crystal (Paul) Wargel who survives.

Dana attended St. Joseph Grade School and Ridgway High School where he graduated in 1973.  He worked at GE in Mt. Vernon for 42 years before retiring.  He loved to play Golf, be outside and garden.  Dana was a good woodworker.  He had personality as large as life, some called him by his nickname, “Dawg” and when he laughed in a crowd you knew who it was.  He was always laughing and enjoying his time with others, but especially his children and now grandchildren.  Dana will be missed by many.

Dana is survived by his wife Crystal of Ridgway, a son, Dane (Phoenix) Wargel of Mt. Vernon, IN, a daughter, Emily (William) Ragan of Ridgway, IL Grandchildren, Penelope and Ryker.  4 sisters, Marsha (Rick) Zirkelbach, Jan (Mike) Grover, Paula Duggan, and Karen (Andy) Smith.  He was preceded in death by a brother Phillip Bullock.

You may also leave a note of comfort or share a story to the family at www.coxandson.com

To order memorial trees or send flowers to the family in memory of Dana Wargel, please visit our flower store.