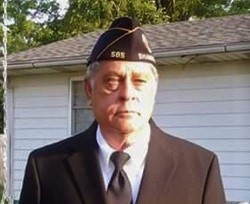 Dannie R. Blair, age 78, longtime Shawneetown resident passed on this life November 7, 2021 in Evansville Indiana after an extended illness.  Dannie was born on January 23, 1943 in Cave in Rock, IL to the late Avalone & Ruby (Rash) Blair.  On September 27, 1969 he married the love of his life, Mary (Keeton) Blair who survives, they just celebrated 52 years of marriage.

Dannie served his country honorably in the US Army seeing action in Vietnam.  He worked for over 35 years in the mining industry before retiring.  He loved Horse racing, both harness and thoroughbred.  He will be missed so much around town with his daily walks.  Dannie’s real love was following his kids especially in sports.  He was a member of the Shawneetown American Legion where he had been past commander.  Though gone from us here on earth, his memory will live on forever.

Visitation for Dannie will be on Wednesday, November 10, 2021 at the Cox & Son Funeral Home in Shawneetown from 11:00 AM to 1:00 PM.  His funeral service will immediately follow at the funeral home starting at 1:00 PM with Rev. Harold Miller officiating.  He will be laid to rest in the Westwood Cemetery near Shawneetown with Military rites be provided by the Shawneetown and Ridgway American Legion and the Army military honors team.

To order memorial trees or send flowers to the family in memory of Dannie Blair, please visit our flower store.