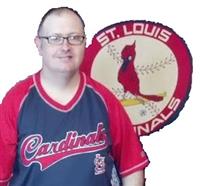 David L. Johnston, age 44 longtime resident of New Haven, died at his home on February 1, 2015. David was born in Carmi, IL on January 30, 1971 to the late John Robinson and Patricia (Johnston) Robinson. David was one of the St. Louis Cardinal Baseball team biggest fans. He loved music, playing video games, CB radios and being with his family. He attended the Coleman Center in Shawneetown for many years. David had a smile that was contagious and showed everyone what unconditional love is. He will remembered for his happiness and will be missed by his family and friends.

David is survived by 2 sisters, May Robinson of New Haven and Laura Coale of Mt. Vernon, IN, 2 brothers, Rex Robinson of New Haven, IL and Cody Robinson of Carmi, IL. His grandmother, Margaret Willis of Ridgway, a very specail Aunt, Cynthia Meadows whom helped take care of David Aunt Judy Willis and Uncles, Gary Johnston and Jim Willis. 2 Nieces and 6 Nephews, Jacob, Brooke, Dylan, Katelyn, Zachary, John, Benton, and Lyle. He was preceded in death by his parents and grandparents, George and Louise Johnston, and Aubrey Willis.

Visitation for David will be on Friday, February 6, 2015 at the Cox & Son Funeral Home in New Haven from 11:00 AM to 1:00 PM. A graveside service will immediately follow at the Union Ridge Cemetery near New Haven. The family ask that those attending the service to wear their St. Louis Cardinal shirts in his memory.

To order memorial trees or send flowers to the family in memory of David L Johnston, please visit our flower store.