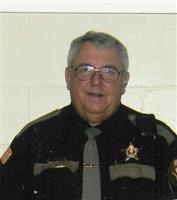 David was born in Eldorado, IL on August 14, 1952 to the late Carl ""Pappy"" and Evadeen ""Toots"" (Roe) Mills. Dave as most called him graduated from Ridgway High School and worked at Bunge Grain in Shawneetown and Kerr McGhee Coal Mine before returning to his real love of being a police officer. Dave had worked part and full time throughout the years for the Ridgway Police Department, and the Gallatin County Sheriffs Dept. He had also been a very active Fireman for the Ridgway Fire Dept. for many years. Since coming back to the Sheriffs Department, Dave became the D.A.R.E officer at the school, he was a great teacher and inspiration to the children about saying no to drugs. Dave also kept busy throughout the community and church. He is a member of the St. Joseph Catholic Church in Ridgway, 4th Degree Knight of Columbus, longtime town board member of the Village of Ridgway, was on the 911 emergency services board and had been a Democrat Precinct Committeemen for many years. In what little spare time he had he loved to fish on the river, boat with his family and friends, dancing with his wife and following high school basketball, always had a smile and good to all people.
Dave was a father of great wisdom and patience and if he gave you his word he meant it, he was a good son, husband, brother, father, grandfather, uncle, and friend. The entire Gallatin County Area will greatly miss him.

He was preceded in death by his Father, Carl ""Pappy"" Mills, and Aunt Loretta Seely.

Visitation for Dave will be Thursday, March 13, 2008 starting at 3:00 PM at the Cox and Son Funeral Home in Ridgway with a Prayer service at 3:00 PM and 4th Degree Chalice service to start at 8;30 PM and concluding with the bell service by the fire dept.
Funeral mass for Dave will be Friday, March 14, 2008 at 10:00 AM at the St. Joseph Catholic Church in Ridgway with Fr. Mark Stec officiating. Interment will be in the church cemetery.

In lieu of flowers the family ask donations be made to Ridgway Fire Department, envelopes will be available at the funeral home.

To order memorial trees or send flowers to the family in memory of David J. Mills, please visit our flower store.