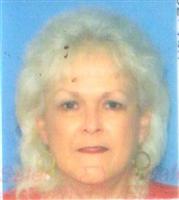 Dolores A. Wallace, age 66 of Ridgway died suddenly January 4, 2012 at her home. Dolores was born on November 17, 1945 in Benton, IL to the late Noble and Berniece (Hubbs) Spain. On June 10, 1966 she married the love of her life, Gordon Wallace who preceded her in death in in 2010. She retired from the State of Illinois in the Dept of Rehab.

Dolores is survived by 1 son, Kevin (Elena) Wallace of Ballwin, MO, 2 grandchildren, Aleksandra and Natalya Wallace. She was also preceded by her sister, Dorothy Weathers and a brother, Lowell Spain.

Per her request, she was cremated. A memorial graveside service will be on Saturday, June 2, 2012 starting at 2:00 PM at the Bruce Chapel Cemetery near Carmi where she will be inurned next to her husband.

Those attending should go directly to the cemetery. Cox & Son Funeral Home in Ridgway is entrusted with the arrangements and you may leave a note of comfort to the family at www.coxandson.com


To order memorial trees or send flowers to the family in memory of Dolores Wallace, please visit our flower store.