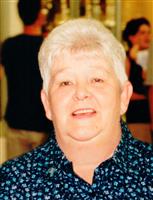 Donna M. Barton, age 67 lifelong resident of Old Shawneetown died peacefully at her home on September 15, 2015 surrounded by her family. Donna was born in Old Shawneetown on August 20 1948 to the late Henry and Velma (Batteese) McGhee. On April 18, 1964 she married her soul mate, Jay Barton who survives.

Donna loved to fish, watch cooking shows, be on the computer, read, spend time at Big Lake at their cabin, but mostly she loved her family. She dedicated her life to her husband, children and grandchildren. She was a very good and humble person that will be missed by many.

Services for Donna will be on Thursday, September 17, 2015 at the Cox & Son Funeral Home in Shawneetown. Visitation will be from 11:00AM to until 2:00 PM her funeral will immediately follow starting at 2:00 PM. Interment will follow in Westwood Cemetery.

To order memorial trees or send flowers to the family in memory of Donna M Barton, please visit our flower store.
Send a Sympathy Card