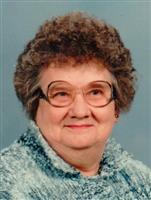 Dorothy was born on August 15, 1916 in Equality, IL to the late Vincent and Minnie (Hish) Zirkelbach. She was married to Joe Keane who preceded her in death in 1984. Dorothy was a faithful member of the St. Kateri Catholic Church in Ridgway where she was very active in the Altar Society. She loved to crochet and travel. Dorothy was always smiling, very kind hearted, a joyous soul. She will be missed.

Dorothy is survived by 2 sons, Bob & Joan Keane of Newburgh, IN and Ed Keane of Evansville, IN. 2 Grandchildren, Michael and Amy and 3 Great Grandchildren, Tanner, Braden and Valerie. She is also survived by her sister in law, Lee Zirkelbach of Ridgway. Dorothy was also preceded in death by, a daughter, Marie Keane, a brother, Cletus ""PeeWee"" Zirkelbach and a sister Mary Helen Gold.

Visitation for Dorothy will be on Thursday, July 24, 2014 from
9:00 AM to 11:00 AM at the Cox & Son Funeral Home in Ridgway. Her funeral service will immediately follow at the funeral home starting at 11:00AM. Fr. Steven Beatty will officiate and her interment will follow in the St. Joseph Catholic Cemetery in Ridgway.


To order memorial trees or send flowers to the family in memory of Dorothy Keane, please visit our flower store.
Send a Sympathy Card