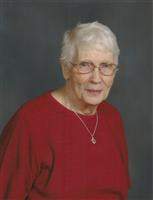 Eileen was born on July 1, 1916, in Omaha, IL, to the late Herman and Lela Jane (Blazer) Mills. She was married to James Dale Crawford, who preceded her in death in 1960. Eileen worked more than 20 years in the U.S. civil service as a Selective Service clerk. After that she worked in numerous other positions, eventually retiring at age 85 after spending years delivering meals for the Golden Circle Nutrition Center. Eileen was a devout Christian and for many years she was a member of the First Presbyterian Church in Ridgway, where she was an Elder and a member of the Women's Guild. After she moved to Effingham in 2006 she attended the First Presbyterian Church there.

Eileen truly enjoyed life, had a wonderful sense of humor and a positive attitude. Her favorite social activities were playing bridge, pinochle and bingo. She loved to dance; totally enjoyed watching her children's and grandchildren's basketball games and other school and church activities; and also loved her many trips to Denver and Las Vegas; but she was happiest any time she was spending time with her family. She raised her family with love and compassion, and she was a good wife, mother, grandmother and sister. She will be missed.

Per Eileen's request, she will be cremated and a memorial service will be announced at a later date.

Arrangements are entrusted to Cox & Son Funeral Home in Ridgway. You may leave a note of comfort to the family at www.coxandson.com.

To order memorial trees or send flowers to the family in memory of Eileen R. Crawford, please visit our flower store.