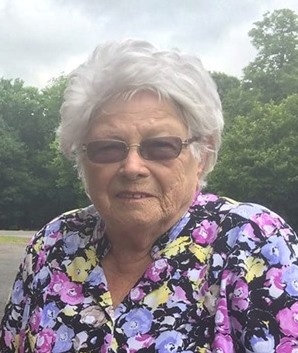 Elfriede M. Moore, age 89, longtime Ridgway passed on peacefully on July 10, 2019 in the Eldorado Nursing and Rehab Center.  Elfriede was born on December 11, 1929 in Stuttgart , Germany to the late Josef Silver Meyerhoefer and Berta Weiser. She left Germany after the War and moved to Canada with her sister.  She had met Bob Moore in Germany and after the war they reacquainted when she moved to Canada.  On April 29, 1954 in Quebec, Canada they were married.  She then moved to the USA and became a citizen in 1964.She loved to travel and did throughout the world.  She had several friends in Ridgway that had fun getting together and fishing.  Bob and Elfriede had a place at Round Pond and spent as much time as they could there with group of really good friends.  She loved people, her family, her German heritage and was really proud of her American Citizenship.She is survived by her sons, Jim (Johnita) Moore of Equality, Steven Moore of La Ott, IN and Kevin Patrick Moore of Ridgway.  A sister, Margaret Ade of Germany, grandchildren, Allison ( Matt) Ingles, Blake Moore, Matt Moore, Shannon Winters, Jennifer (Andy) Sweat, Great Grandchildren, Kennedy Ingles, Riley Moore, Eli Moore, Raylyn Moore, Carter Moore, Paisley Moore, Micalea (Gabe) Morgan, Drew Sweat, and Shannon John Winters, Great Great Grandchildren, Wrenlee Morgan. Many nieces and nephews.  She was preceded in death by her husband Bob, her parents and a sister, Louise Wilkerson.

Visitation will be on Sunday, July 14, 2019 from 4:00 PM to 7:00 PM at the Cox & Son Funeral Home in Ridgway, her funeral mass will be on Monday, July 15, 2019 at the St. Kateri Catholic Church in Ridgway starting at 11:00 AM with Fr. Steven Beatty celebrating.  She will be laid to rest in the Elmwood Cemetery near Equality.

To order memorial trees or send flowers to the family in memory of Elfriede Moore, please visit our flower store.