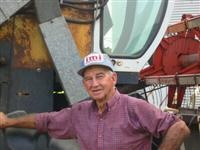 Ernest Leon ""Cutter"" Rodgers, age 84 lifelong Gallatin County resident died peacefully on October 30, 2012 in the Ridgway Nursing and Rehab Center. Cutter as most knew him was born in Hamilton County, IL on February 29, 1928 to the late Ernie and Anna (Riley) Rodgers. He has been married for over 62 years to the love of his life, Lois (Patton) Rodgers whom he married on March 29, 1950. He served his country in the Army during the Korean War. Cutter was always working, as he farmed, worked at the coal mines, did carpentry work, was the Highway Superintendent for Gallatin County for 19 years. He loved to be outside and was known for growing watermelons. He was a faithful member of the Junction First Baptist Church for years where he was a deacon. Cutter had wonderful outlook on life always saying he would not change a thing and when you asked him how he was, he always said, ""Truly Wonderful"". He was a wonderful husband, father, grandfather, brother and friend and will be greatly missed.

Visitation for Cutter will be on Thursday, November 1, 2012 at the Cox & Son Funeral Home in Shawneetown from 5:00 to 8:00 PM. Funeral service will on Friday, November 2, 2012 at 11:00 AM at the funeral home. Interment will follow at the Westwood Cemetery in Shawneetown.

In lieu of flowers you may make a donation in his memory to the Junction First Baptist Church. You can leave a note of comfort to the family at www.coxandson.com


To order memorial trees or send flowers to the family in memory of Ernest Leon Rodgers, please visit our flower store.