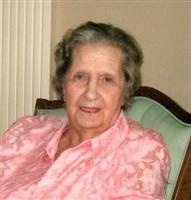 Fern Miner, age 95 longtime resident of Ridgway, IL passed away peacefully on Wedneday, July 20, 2011 at the home of her daughter in Owensboro, KY. Fern was born on May 3, 1916 to the late Lee and Rhea (Brown) Rister in Omaha, IL. She was married to the late Dale Miner on September 16, 1933. She was a faithful member of the Ridgway First Baptist Church. She was also a member of the Eastern Star, American Legion Auxillary, Women's club, and was named Mother of the Year once in the Ridgway School system. She was a devoted caregiver to her family and enjoyed decorating her home, reading, and playing cards. Fern was a wonderful wife, loving mother and grandmother, good sister and friend. She will be greatly missed by the community. Fern is survived by, a daughter Donna (John) Tate of Owensboro, Ky,
3 grandchildren, Jonna (Cary) Raymer, Mark (Denise) Mills, and Kristi (Jim) Roe along with 6 great grandchildren, Travis, Rowdy, Megan, Jonathon, Logan and Aaron. Fern was preceded in death by her parents, her husband Dale, a son Carroll Miner, 4 Sisters, Liza Willis, Wanda Mills, Helen Rister, and Melba Stovall, along with a brother, Donnie Rister and a son in law, John Lee Mills. Funeral service for Fern will be on Friday, July 22, 2011 at 1:00 PM at the Cox & Son Funeral Home in Ridgway with Rev. Rob Gallion officiating. The family will receive friends after 11:00 AM until funeral time at the funeral home. Interment will follow at the Jackson Cemetery near Ridgway. The family ask in lieu of flowers that donations be made to the Hospice of Western KY, 3419 Wathens Crossing, Owendsboro, KY, 42301

To order memorial trees or send flowers to the family in memory of Fern Miner, please visit our flower store.