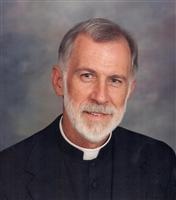 Fr. Donald E. Abell, age 72 died Thursday, March 24, 2011 in the Fountainview Nursing Home in Eldorado after an extended illness. Fr. Don was born in Ridgway on their family farm, September 22, 1938 to Martin and Louise (Wenzel) Abell. Fr. Don graduated from Ridgway High School and then entered the seminary for priest hood. Before becoming a priest he taught grade school in Ridgway. In 1976 he was ordained into the priesthood and was at the Cathedral in Belleville before being placed in St. Mary's in Eldorado where he retired in 2006. Fr. Don had a passion for everything he did, rather it was his family, his church, his flowers or life in general. His knowledge and ability to raise Orchids was second to none. He was a 4th Degree sir knight of the Knight of Columbus in Ridgway where he also served as chaplain. He had been the chaplain at the Illinois Youth Center and pas Dean of the East Deanery of Belleville. Fr. Don was a great son, brother, uncle and friend, but mostly was a great priest who will never be forgotten as he touched so many lives in such wonderful ways. Fr. Don is survived by, his loving mother, Louise Abell of Ridgway, 4 Brothers, Bob (Barbara) Abell of Fairview Heights, IL, Richard (Barbara) Abell of Ramsey, IL, Larry (Connie) Abell of Goreville, IL and Pat (Becky) Abell of Ridgway, also 2 Sisters, Linda (Charles) McGuire of Ridgway and Cathy (Jim) Smith of Harrisburg, IL. Many nieces, nephews and friends. He was preceded in death by his father and 3 nephews, Charles Anthony McGuire, David Abell and Mark McGuire. Visitation for Fr. Don will be Friday, March 25, 2011 from 4:00PM to 8:00 PM at the St. Joseph Catholic Church in Ridgway. Funeral Mass will be on Saturday, March 26, 2011 at 10:30 AM at St. Joseph Catholic Church in Ridgway with Fr. Steven Beatty celebrating mass. Interment will follow in the St. Patricks Cemetery near Ridgway. In lieu of flowers donations may be made to the Alzheimers Research in his memory.

To order memorial trees or send flowers to the family in memory of Fr. Don Abell, please visit our flower store.
Send a Sympathy Card