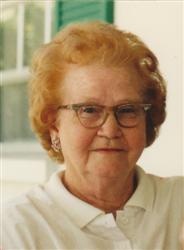 
Freda Brown, age 93, a longtime resident of Ridgway passed at the Ridgway Manor Nursing Home on Tuesday, February 05, 2008. Freda was born March 3, 1914, in Herod Il, to the late Marion and Ollie Mae (Milligan) Johnson. In November of 1941 she was married to the late Rev. Norton Brown.

Freda worked as a welder in World War II and for many years at Harrisburg Manufacturing. She loved to tend to her flower garden and enjoyed the company of her friends. She was always smiling and loved to sing. Freda was a good mother, wife, sister, grandmother and friend. She will be greatly missed by the community.

She is survived by 3 Sons, Roy (Judie) Brown of Chattanooga, TN, Bob (Sandy) Brown of Mt. Vernon, IN and Roger (Clara) Brown of Petersburg, IL, 17 Grandchildren and 34 Great Grandchildren. Freda was preceded in death by her parents, husband, 1 Son Russell Cullum, 3 Brothers and and 3 Sisters.


To order memorial trees or send flowers to the family in memory of Freda Brown, please visit our flower store.