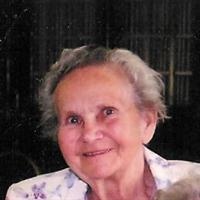 Geneva M. Butts, age 86 longtime resident of Shawneetown died Wednesday, May 12, 2010 in the Ridgway Manor Nursing Home. Geneva was born in Hardin Co., IL on March 22, 1924 to the late George & Elizabeth (Bryson) Thorne. She worked on the LST Ship during World War II as a welder or as some use to say ""Rosie the Riverter"". In March of 1947 she married Neal Butts who preceded her in death in 1990. Geneva loved baseball especially watching her grandchildren play. She was always taking care of her family as that was her life. She attended faithfully the Ohio Valley General Baptist Church in Shawneetown until her sickness. Geneva was a good wife, mother, grandmother, sister and friend, she will be missed. Geneva is survived by, a daughter - Thalitha (Art) Deras of Shawneetown, a son - Terry Butts of Mt. Vernon, IN, 7 grandchildren, - Chris (David) Hyatt, Tricia (Patrick) Yates, Amanda Butts, Mikel Butts, Crystal (Chris) Willis, Sherri (Nathan) Hungate, and Denise (Jeremy) Hasting. 13 Great Grandchildren, Anthony, A.J, Joey, Amanda, Mikel, Chelsey, Chance, Abram, C.J., Dalton, Gage, Colton and Wyatt. She was preceded in death also by 2 sons, Ronald Butts and Kenny Thorne

Visitation for Geneva will be Friday, May 14, 2010 from 4:00 to 8:00 PM at the Cox & Son Funeral Home in Shawneetown. Funeral services will be on Saturday, May 15, 2010 at 11:00 AM at the funeral home with Rev. Harold Ewell officiating. Interment will be in the Westwood cemetery


To order memorial trees or send flowers to the family in memory of Geneva M. Butts, please visit our flower store.
Send a Sympathy Card