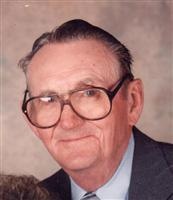 George Aaron ""Barney"" Riley, age 94, lifelong resident of Ridgway, died Sunday, January 30, 2011 in Mt. Vernon Indiana. Barney as most knew him was born on the family farm East of Ridgway on June 23, 1916 to the late James and Zetta (Zirkelbach) Riley Bastnagel. He was married on July 20, 1941 to the love of his life, Helen (Rollman) who preceded him in death in 2000. Barney served his country during World War II from 1943 to 1946 in the Army, where he served in the European Theatre. He worked and retired from Scherrer Equipment Co. in Ridgway after 40 plus years working as the parts clerk. He then worked for over 10 years with the Golden Circle, delivering meals to the shut-ins. He also worked at Ridgway Auto Parts after retirement. He was a lifelong and very faithful member of the St. Joseph Catholic Church in Ridgway, along with being one of the oldest members of the Knights of Columbus in Ridgway, where he was a Past Grand Knight and Honorary Life Member. He was a member of the Lions club and the Ridgway American Legion and VFW.

Some people might remember him from his other nickname ""Superman"" as a lot of people called him. He was a good father, husband, brother and friend and will be greatly missed by the people of Gallatin County.

Barney is survived by his daughter, Cathy (Doug) Mattox of Mt. Vernon, In, 2 grandchildren, Kimberly Cooper and Aaron Mattox, along with 3 Great Grandchildren, Brandon, William and Brooke. He is also survived by 1 brother, Bob (Sharon) Bastnagel of Newburg, IN and 1 sister Anna Frances ""Bea"" Drone of Carbondale, Il. He was also preceded in death by 1 brother, John Bastnagel, and 3 sisters, Catherine Scherrer, Jean Wright, and Pat Lester.

Visitation for Barney will be on Tuesday, February 1, 2011 starting at 4:00 PM and ending at 7:00 PM at the Cox and Son Funeral Home in Ridgway. A prayer service will be at 4:00 PM and the Knights of Columbus service will be at 7:00 PM. The funeral mass for Barney will be on Wednesday, February 2, 2011 starting at 10:00 AM at the St. Joseph Catholic Church in Ridgway with Fr. Steven Beatty officiating. Interment will follow at the St. Joseph Cemetery with military rites being performed by the Ridgway American Legion and VFW.

In lieu of flowers the family ask donations be made to Golden Circle.

To order memorial trees or send flowers to the family in memory of George ""Barney"" Riley, please visit our flower store.