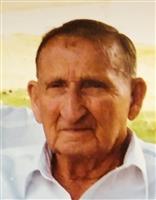 Guy N. Gravett, age 91 longtime resident of Ridgway, died peacefully on Tuesday, April 21, 2015 in the Ridgway Nursing and Rehab Center. Jake as most knew him was born in Mayfield, Ky on December 13, 1923 to the late Raymond and Montell (Brooks) Gravett. He was married to Buevetta (Watts) Gravett in 1948 and she preceded him in death in 2003. Jake worked for Illinois Power as a lineman for over 45 years before retiring. He was a member of the First Baptist Church in Ridgway, helped many years during popcorn days, owned and operated Gravett Grocery store in Ridgway for many years. He was always very witty, and loved to be around his friends, he was a founding member of the Wednesday Night Poker Club in Ridgway in 1972 which he really enjoyed until he could not play any more. Jake was a good father, husband, grandfather, brother and friend and will be missed.

Per Jake's request he will be cremated and he will be laid to rest by his wife in the Little Obion Cemetery in Wingo, Ky on May 9, 2015 at 1:00 PM. Those attending should meet at the cemetery.

In lieu of flowers you may make a donation in his memory to American Heart Association.

Cox & Son funeral home in Ridgway is entrusted with the arrangements where you may leave a note of comfort to the family at www.coxandson.com


To order memorial trees or send flowers to the family in memory of Guy Jake Gravett, please visit our flower store.