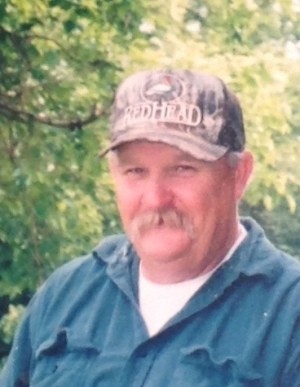 James K. “Corky” Merritt, age 68, longtime New Haven resident, passed on this life, Sunday, December 30, 2018 in Ferrell Hospital, Eldorado, IL.  He was born in New Haven on October 30, 1950 to John and Minerva (McIntosh) Merritt both deceased.  He attended and graduated from Ridgway High School and then served his country in the United States Army in Vietnam.

On January 4, 1974 he married the love of his life, Leslie (Upton) Merritt.  Corky always loved to work with equipment and was fortunate enough to work at a job he loved to do, for 43 Years he worked on the CSX railroad, before retiring.  He loved to hunt and be outdoors, especially duck hunting.  He also had a love for racing, spending many nights racing his car at the local dragstrip.  He was the type that would help anyone and was always thought of,  as a good man.  His real love was his family, taking his kids hunting and fishing and now enjoying his grandchildren.  Corky was a good husband, father, grandfather and friend and will be missed.

Corky is survived by his wife, Leslie of New Haven, 2 daughters, Whitney(Terry) Tripp of Norris City, and Chelsea (Kyle) Dortch of Galatia.  2 grandchildren, Tenley and Trace Tripp and a new one on the way.  He is also survived by a 3 sisters, Naomi Hines of Equality, Marie Gifford and Ruth Finks.  He is preceded in death by 2 brothers, Dillard and Donald Merritt

Visitation for Corky will be on Wednesday, January 2, 2019 from 4:00 PM to 7:00 PM at the Cox & Son Funeral Home in New Haven, IL.  His funeral service will be on Thursday, January 3, 2019 at the funeral home starting at 11:00 AM.  He will be buried in the Union Ridge Cemetery near New Haven with Military rites by the Ridgway American Legion/VFW and Army Honors Team.

Memorial contributions can be made to the charity of your choice in his memory and envelopes will be available at the funeral home.  You may leave a note of comfort to the family at www.coxandson.com

To order memorial trees or send flowers to the family in memory of James Merritt, please visit our flower store.