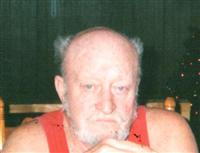 Jewell ""Butch"" Johnson, age 69, resident of Carmi, died Wednesday, October 19, 2011 in Hamilton Memorial Hospital at McLeansboro, IL. Butch was born to the late Jewell & Valada Johnson Sr. Butch served his country in the Navy. He was a member of Springerton Legion. Most people will remember him working for Asplen for over 20 years. He was a good Father, Brother & Friend to many. Butch will be missed by his community. He is survived by one Son, John Johnson of Owensboro, KY, Two Daughters, Mindy Chrtt of Noble, IL. and Missy Baucaudell of Crofton, KY. Best Friend and Companion of 14 years, Inoa Scheynayder , her children Rodney Abbott & Tracy Cartwright. Jewell is survived by several Grandchildren. He was preceded in death by 2 Sisters, 1 Brother and Grandson Saxson Cartwright. Visitation for Butch will be on Saturday, October 22, 2011 from 4 to 7 PM at the Cox & Son Funeral Home in New Haven, IL. Funeral services for Butch will be on Sunday, October 23, 2011 at 11:00 AM at the Cox & Son Funeral Home in New Haven. Interment will follow at the Union Ridge Cemetery with Military rites. You may leave a note of comfort to the family at www.coxandson.com

To order memorial trees or send flowers to the family in memory of Jewell ""Butch"" Johnson, please visit our flower store.