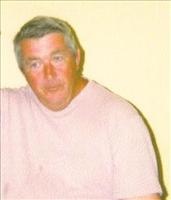 John Harvey Browning, age 61 longtime resident of Shawneetown died Monday, April 13, 2009 at his home in Shawneetown, Il. Harvey as most knew him was born in Shawneetown on August 16, 1947 to the late Hubert and Gladys (Hooven) Browning. Harvey attended school in Shawneetown and worked at the Shawnee Cabinet Factory for about 10 years. He was always happy and loved visiting with his friends and family. He was a avid Atlanta Braves Baseball fan. He was a faithful member of the First Baptist Church in Shawneetown. Harvey was a good Brother, Son and Friend, he will be greatly missed by the community of Shawneetown

He was preceded in death by Brothers, Hubert, Ray, J.W. and James Browning along with a sister, Nomia Ruth, Mix

Cremation has been accorded. A memorial visitation will be Friday, April 17, 2009 from 10:00 AM until 12 Noon with a graveside service to immediately follow at the Mt. Zion Cemetery near Cave In Rock. Rev. Jack Hall will be officiating.

Cox and Son Funeral Home, Shawneetown Chapel is entrusted with the arrangements,
on line condolences can be sent to the family at www.coxandson.com

To order memorial trees or send flowers to the family in memory of John Harvey Browning, please visit our flower store.
Send a Sympathy Card