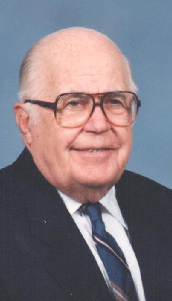 John J. Scherrer, age 100, longtime Ridgway resident passed away August 3, 2017 in the Eldorado Nursing and Rehab Center.  John was born in Shawneetown on April 25, 1917 to the late George B. and Susan (Leavell) Scherrer.  He graduated from the University of Illinois and was the Ag teacher in Shawneetown until 1941 when he enlisted into the Air force during World War II.  He was a bombardier and participated in the raids over Germany.

On June 29, 1946 he married his love, Abbie (Hermes) Scherrer whom preceded him in death in 2010.  John and Abbie moved to Ridgway where they owned and operated Scherrer Equipment for many years.  John was a very civic minded person, being involved in many organizations especially the Ridgway American Legion and VFW where he was past commander and the Ridgway Knights of Columbus where he was Past Grand Knight, Faithful Navigator, District Deputy and held the state office of Warden and received the Illinois State Medallion, the highest individual award for service to the order.

John and his late wife Abbie’s real love was their church, St. Kateri Catholic Church in Ridgway where they played many roles.  John lived a life that showed all of us the true many of charity.  He will be missed by many.

Visitation for John will be on Sunday, August 6, 2017 at the Cox & Son Funeral Home in Ridgway from 4:00 PM to 7:00 PM., a prayer service will be said at 7:00 PM.  His funeral mass will be on Monday, August 7, 2017 at the St. Kateri Church in Ridgway starting at 10:00 AM with Fr. Steven Beatty, Fr. Carl Scherrer and Monsignor Joe Lawler concelebrating mass.  His burial will follow in the St. Joseph Cemetery in Ridgway with Military rites.

Memorial contributions are suggested the Knights of Columbus, Ridgway American Legion, American Cancer Society or the St. Kateri Church Building fund.  Envelopes will be available at the funeral home.

To order memorial trees or send flowers to the family in memory of John J. Scherrer, please visit our flower store.