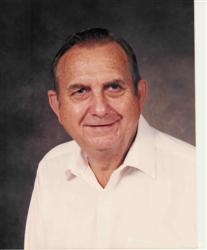 Joe Ed was born in Equality on February 3, 1925 to the late Thurman and Liddie (Uselton) Harrelson. He was married for many years to Dorothy (Clark) who preceded in death. He then marred Hazel (Koker) who survives.

Joe Ed served his country in the Navy during World War II, he worked for the Illinois Dept. of Transporation Highway Dept, and retired from the Peabody Coal mines. He was a member of the Equality American Legion being a 50 year member, UMWA local 1602.

Visitation for Joe Ed will be Monday, February 25, 2008 from 5 to 8 pm at the Cox and Son Funeral home in Ridgway. Funeral will be Tuesday, February 26, 2008 at the funeral home starting at 11 AM with Rev. Duke Williams officiating. Interment will be in the Elmwood Cemetery near Equality with Military rites by the Equality American Legion.

On line condolences can be sent to the family at www.coxandson.com

To order memorial trees or send flowers to the family in memory of Joseph E. ""Joe Ed"" Harrelson, please visit our flower store.