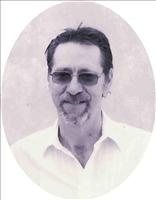 Larry Newton Willis, age 53 of Ridgway passed on this life, Saturday, June 7, 2008 at his home. Larry was born in Eldorado, IL on January 6, 1955 to Neal Willis and Phyllis (Dooley) Lasseter.

Scrappy as his friends knew him was a natural born musician. He played the lead guitar and was in many bands over the years. He played completely by ear and was well known for his ability. He loved to talk and be with his friends. Larry attended church at the Crossroads Church in Norris City. Larry will be greatly missed by his family and friends.
Larry is survived
Mother Phyllis (Dooley) Lasseter Ridgway, IL
Daughter Myranda Willis Ridgway, IL
Daughter Michelle Willis Mt. Carmel. IL
Son Michael Willis Carmi, IL
Sister Mona (Bob) Roberts Ridgway, Il
Step Son Wes McCluskey Ridgway, IL
3 Grandchildren Elizabeth, Jessica, and Mark

Preceded in death by a Sister - Rosanna Willis and his father

Larry's wishes was to be cremated. A memorial service will be Wednesday, June 11, 2008
at 7 PM at the Cox and Son Funeral Home in Ridgway, where the family will receive friends after 6 PM

In Lieu of flowers the family ask that contributions be made to the American Cancer Society.

To order memorial trees or send flowers to the family in memory of Larry N. Willis, please visit our flower store.