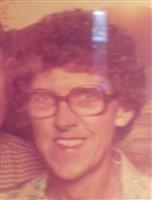 Lena had worked as a Phone Operator at GTE before retiring. She loved animals of all kinds but enjoyed raising rabbits. She loved to visit and talk with people and always had a kind word for you. She was a member of the Eldorado First Baptist Church and a life member of the VFW Auxillary. Lena also loved to fish. She was a good wife, mother, grandmother and friend and will be missed.

Cremation will be accorded as this was Lena's wish. Her graveside service will be on December 14, 2014 at the Hazel Ridge Cemetery near Omaha starting at 1:00 PM. Those wanting to attend should go directly to the cemetery.

Cox & Son funeral Home in Ridgway is entrusted with the arrangements and you can leave a note of comfort to the family at www.coxandson.com


To order memorial trees or send flowers to the family in memory of Lena B. Durbin, please visit our flower store.