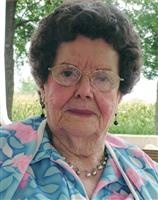 Liberty ""Wilson"" Ball, age 91 of Harrisburg but longtime former resident of New Haven, died peacefully on Monday, June 27, 2011 in the Saline Care Center in Harrisburg. Liberty was born on December 14, 1919 in Mt. Vernon, IL to the late Joseph and Sarah (Redmond) Thomas. Liberty was married to Guy Wilson whom her children were born, he preceded her in death, she was then married to Jeff Price and Ed Ball, and both preceded her also. Liberty was a person full of life with a real spirited soul and uncanny sense of humor. She was well known for her cooking operating a restaurant in New Haven years ago. She was always a very neat person, with her house and clothes always immaculate. She attended school in New Haven, and was a member of the Green Tabernacle Church when there. In later years she attended the Church of God in Harrisburg. Liberty was a wonderful mother, wife, grandmother, sister and friend. Liberty is survived by her son, Guy (Nancy) Wilson of Eldorado, IL, along with 5 grandchildren, Bryan (Jill) Wilson of Mt. Vernon, IN, Eric (Tami) Wilson of Mooresville, IN, Julie Girot Albers, Jill Girot and Joe (Bebe) Girot all of Galatia and 5 Great Grandchildren. Liberty was preceded in death by a 2 daughters, Marcella a Donahue, and Beverly Wilson along with 1 son, Joseph Wilson. She was also preceded by 4 brothers, jess Thomas, Thurman Thomas, Finis McGhee, and William Jennings Thomas and 2 sisters, Mary Clifford and Thursa Wood. Visitation for Liberty will be on Thursday, June 30, 2011 starting 11:00 AM followed by her funeral services, starting at 1:00 PM at the Cox & Son Funeral Home in Ridgway. Rev.Jonathan Peters will officiate and interment will follow in Plainview Cemetery near New Haven.

To order memorial trees or send flowers to the family in memory of Liberty Ball, please visit our flower store.