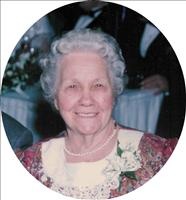 Lillie Pauline Milligan, age 88 of Shawneetown, IL passed away peacefully at her daughters home in Elgin on April 9, 2008.

Pauline was born in the Saline Mine Area south of Shawneetown on January 14, 1920 to the late Robert and Rosie (Pearson) Williams. On May 9, 1936 she married her true love, Vernal (Mutt) Milligan who preceded her in death in 2003.

Pauline and Vernal moved up to the St. Charles, IL to work for many years before returning to Shawneetown for retirement. Pauline was a great cook, loved to garden with her husband, and believed so much in the power of prayer, she was a Baptist by faith.

In lieu of flowers the family ask donations be made to the Bowes In Home Care with envelopes being available at the funeral home.

To order memorial trees or send flowers to the family in memory of Lillie Pauline Milligan, please visit our flower store.
Send a Sympathy Card