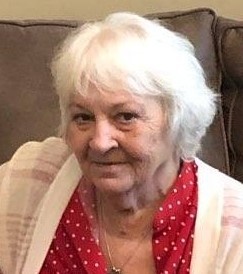 Linda worked at various occupations, including being a nurse and a restaurant cook.She was Nana, Grandma, and Grandma PI to her beloved grandchildren.

In addition to her parents and husband John Edwards, she was preceded in death by three brothers, Bob, Terry, and Roger Dale Upton; two sisters, Priscilla Marquez and her twin Glenda Kaye Whitlow; and a nephew, Scott Dale.

Funeral services will be held at 11 am Monday, Feb. 3 at Cox & Son Funeral Home in New Haven. Rev. Buddy Hubbard will officiate.   Burial will follow at Union Ridge Cemetary near New Haven. Visitation will be held from 4 to 7 pm Sunday, Feb. 2 at the funeral home.

In lieu of flowers, donations may be made to the SIH Cancer Center in Carterville and will be accepted at the funeral home.

You may leave a note of comfort to the family or obtain memorials  at www.coxandson.com

To order memorial trees or send flowers to the family in memory of Linda Edwards, please visit our flower store.