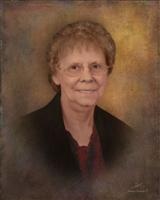 Lodema was born in Ridgway, IL on May 13, 1943 to the late Estel and Abigail (Dodge) Sauls. She was married to Ralph Nelson on July 15, 1983. Lodema or Toby as some called her was always a happy person giving you a smile when you seen her. She had worked for many years at the Carmi Hospital and a Nursing Home in Danville. She was an accomplished Majorette, a very good softball player, and a very hard worker. She loved to do crafts, decorating but most of all loved to be with her family. She was a good Mother, Wife, Grandmother, Sister and friend, she will be greatly missed.

Lodema is survived by her husband Ralph of Enfield, Daughters, Paula (Randy) Wagner of Danville, Il, Pauline (Carl) Ingles of Eldorado, IL, and Margaret Nelson of Olney, IL. Sons, Kevin Sauls of Ridgway, Il and Jeff Nelson of St. Louis, Missouri. Brother, Lonnie (Sandy) Sauls of Ridgway, IL and a Sister, Anita (John) Hester of Marion, IL. 10 Grandchildren, 13 Great Grandchildren and 1 Great Great Grandchild. She was preceded in death by her parents along with 1 Sister, Wanda and 2 Brothers, Lenny and Leon.

Words of comfort may be sent to the family at www.coxandson.com


To order memorial trees or send flowers to the family in memory of Lodema A. ""Toby"" Nelson, please visit our flower store.
Send a Sympathy Card