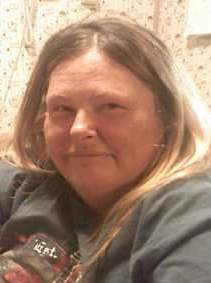 Lydia D. Mays, age 54 of Old Shawneetown, died peacefully August 3, 2016, in the Integrity Health Center in Ridgway with her daughter at her side.

Lydia was born near E. St. Louis, IL on November 25, 1961 to the late Cecil and Mary (Whelcher) Johnston.  She loved to be outside, camping and especially fishing at the river.

She is survived by her daughter, Valerie and James Ales of Old Shawneetown, 1 brother, Vardie Johnston of Salem, IL and 5 grandchildren.  She was also preceded by a granddaughter.

Cremation is being accorded and a graveside service will be held at a later date in the Westwood Cemetery in Shawneetown.

Cox & Son Funeral Home in Shawneetown is entrusted with the arrangements

To order memorial trees or send flowers to the family in memory of Lydia D Mays, please visit our flower store.