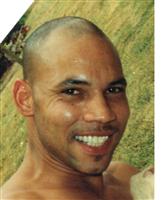 Marcus Monroe age 46, died suddenly on Saturday July 9, 2011 in Evansville In. Marcus was born on April 30, 1965 in Akron, Ohio to Joseph Monroe and Diane (Drone) Monroe Patrick. Marcus graduated from Carrier Mills High School in 1983 and earned a BS degree in Business Adminstration in 1994 at Southern Illinois University. He served his country in Military in the United States Air Force. He was Catholic by faith. Marcus owned and operated his business LET ME, was always a free thinker was very much business oriented. He had many interests, but most were Research and Development, writing music and poetry and art. He loved nature, was an avid photographer. Marcus was a good father, brother, son and friend and will be greatly missed. Marcus is survived by his mother, Diane (Drone) Patrick of Ridgway, 4 Children, Merissa, Victoria, Monay and Cameron, along with 2 Brothers, Joseph and Patrick and 2 Sisters, Yvonne and Gabrielle. A special niece and great niece, Falon and LaDeja. He was preceded in death by his father and grandparents. Visitation for Marcus will be on Thursday, July 14, 2011 from 5:00 PM to 8:00 PM at the Cox & Son Funeral Home in Ridgway where a prayer service will be held at 7:30 PM. Funeral services will be on Friday, July 15, 2011 at 1:00 PM at the Cox & Son Funeral Home in Ridgway with Fr. Steven Beatty officiating. As per Marcus request, he will then be cremated and his ashes will be spread at a later date by the family privately. In lieu of flowers the family ask that donations be made to the Shelter and Food Pantry in Marion, IL, envelopes will be available at the funeral home.

To order memorial trees or send flowers to the family in memory of Marcus T. Monroe, please visit our flower store.
Send a Sympathy Card