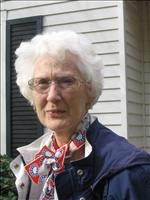 Mary Ethel Browning longtime Ridgway resident, passed on this life, Saturday morning, July 26, 2008 at Ferrell Hospital in Eldorado, IL surrounded by her daughters.
Mary was born in Paragould, Ark on September 21, 1917 to the late Thomas J. and Ara Belle (Wren) Goodwin. On November 14, 1935 in Alton, IL she married was united in marriage to Robert ""Bob"" Browning of New Haven, IL, who preceded her in death in 1969.
Mary was a good Christian person and a faithful member of the Ridgway First Baptist church, where she taught Sunday School for over 25 years. Many people will remember her from working over 23 years at the Skaggs Reeder Drug store in Ridgway before retiring. Mary was a good wife, mother, grandmother, sister and friend. She will be greatly missed by her family, community and church.
Mary is survived by 2 daughters, Judy and Frank Koester of O'Fallon, Missouri and Peggy and Fred McGuire of Greenwood, South Carolina. One Sister - Claudia Hibbs of Lawrenceburg, KY, 4 Grandchildren Rebecca (Koester) Tucker, Robert Koester both of O'Fallon, Mo., Jana (Koester) Conoyer of St. Peters, Mo., and Amy (McGuire) Troiano of Simpsonville, SC, 9 Great Grandchildren, Miranda, Hannah and Zachary Koester, Jared, Jordan, and Emily Queen, Dale Conoyer, and Michael and Scott Troiano.
She was preceded in death by her parents, husband and a sister Velma Unthank.
Visitation for Mary will be Monday, July 28, 2008 at the Cox and Son Funeral Home in Ridgway from 5:00 PM to 8:00 PM. The Funeral will be Tuesday, July 29, 2008 starting at 11:00 AM at the Cox and Son Funeral Home in Ridgway, with Rev. Rob Gallion officiating. Interment will be in the Union Ridge Cemetery near New Haven, IL.
In lieu of flowers the family ask donations be made to the Ridgway First Baptist Church, Building fund. Envelopes will be available at the funeral home.


To order memorial trees or send flowers to the family in memory of Mary E. Browning, please visit our flower store.