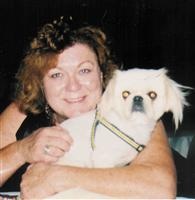 Elaine, as she was known, was born in Eldorado, IL December 12, 1956 to James L. and Lucretia Browning. She was a graduate of Ridgway High School in 1975. Elaine was well known in Southeast Florida for the past 17 years as the Property Administrator for Kenco Properties in Boca Raton. Elaine will be missed by her many friends and colleagues'. An avid dog lover, she leaves behind Dakota her beloved Pekingese.

According to the wishes of the family the services were private.


To order memorial trees or send flowers to the family in memory of Mary Elaine Browning, please visit our flower store.
Send a Sympathy Card