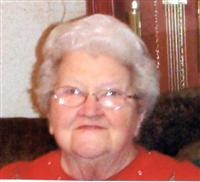 Mary Roberta Tarrence, age 79 died Friday, January 21, 2011 in Deaconess Hospital from a sudden illness. Roberta as most knew her was born south of Shawneetown on May 9, 1931 to the late Robert and Mary (Owens) Kinder. Roberta and her late husband Bill Tarrence were well known for years owning and operating Roberta Quilts in Shawneetown. She has been driving a school bus for over 40 years and was one of the things she really enjoyed doing. Roberta was the oldest member of the Shawneetown Lions club where she was always very active. She was a member of the Shawneetown First Baptist Church. Roberta loved to be with her grandchildren. She will be missed by the community.

She was preceded in death by, her parents, husband, 2 sons, Eddie Hise and Bobby Watters, 2 daughters, Donna Bolton and Mary Curry, son in law, John Durham, and 2 grandchildren, Kelly Hise and Chris Sharp.

Visitation for Roberta will be on Monday, January 24, 2011 from 5:00 to 8:00 PM at the Cox & Son Funeral Home in Shawneetown and the funeral service will be on Tuesday, January 25, 2011 at 11:00 AM at the funeral home. Rev. Jack Hall will officiate and interment will be in Westwood Cemetery.


To order memorial trees or send flowers to the family in memory of Mary Roberta Tarrence, please visit our flower store.