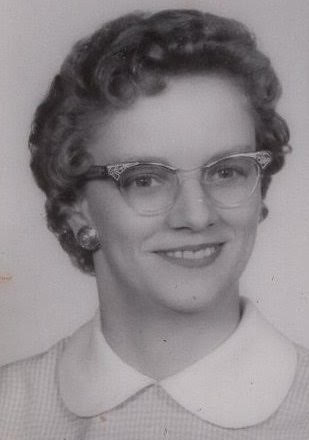 Mescal Marie Wilson Bair was born on January 22, 1927 on a farm in southern Illinois after the doctor arrived on horseback during a snowstorm. After living independently in her own home through her 94th birthday, she passed away at her daughter’s home this Sunday, June 6, 2021. She loved cooking and sharing meals with family and friends, working on complicated jigsaw puzzles, and watching Jeopardy. Since she was quite witty herself, she also appreciated interesting obituaries.

She was born to George Henry Wilson and Mary Kinsall Wilson. She and her younger sister, Marian, drove tractors in the fields after school and studied by kerosene lamps until high school, when the family home finally got electricity. (The farm continues in the family — once growing popcorn, now corn and soybeans.) After graduating from Ridgway High School, she ventured off to St. Louis and did clerical work for the Katy Railroad. After several years, she moved to Chicago, where she attended beauty school and became a hairstylist. Four months after meeting Irwin Robert “Buddy” Bair, they married on the best man’s birthday. Following her lifelong love of cooking, she took several premier culinary courses. One year, she made over 300 lbs. of chocolate creams in her small kitchen.

Her life dramatically changed when the couple received a call asking if they wanted to adopt a newborn baby girl. Three days later, they were parents to Mary Clare. In 1974, the “three Bairs” moved to Palm Beach Gardens, Florida where Mescal (May) continued to make (and cook for) countless lifelong friends. She took care of Buddy through his diagnosis of muscular dystrophy, progression to a wheelchair, and eventual death in 1992. Moving to Fort Smith, Arkansas, in 1993 allowed her to fully enjoy two of her greatest loves: her grandchildren, Ken and Colleen. She attended numerous school and sporting events, walked daily on the treadmill at Marvin Altman for years, and made her unique pineapple curry for numerous special occasion family dinners. Gathering many cookie recipes, she mailed homemade cookies monthly to Ken during his four years of college. She always had a pile of cookbooks within reach, reading each one cover to cover.

Mescal is survived by her only child, Mary Clare Flanagan (Dean), grandson Ken Flanagan (Emily), and granddaughter Colleen Flanagan.
Graveside service at Asbury Cemetery North East of Ridgway for Mescal will be June 26, 2021 at 11:00 AM.  Rev. Roger Lyons will offiiciate and those wanting to attend should meet at the cemetery.


Since Mescal spent her life feeding others, the family asks that a donation be made to her favorite charity, the River Valley Food Bank, or to your local food bank in place of flowers (she did not like irises, anyway).

To order memorial trees or send flowers to the family in memory of Mescal Bair, please visit our flower store.