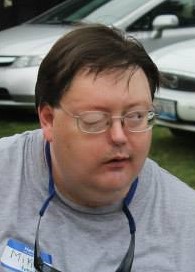 Michael Edward Treat, age 51, born and raised in Ridgway passed peacefully on December 23, 2020 at Lodi Adventist Hospital in Lodi, California. Michael who was born on November 18, 1969 was known as “Treato” to his friends and was affectionately referred to as Bubba by his family and loved ones.

Michael grew up in Ridgway, attending Ridgway High School where his 6’8 frame automatically landed him on the basketball team. Michael worked at the Pop-Rite Popcorn factory for nine years following in his mother, Agnes (Keane) Treat’s footsteps. Michael lived with and took great care of his mother for many years, from going to the tin store to get her a Tab cola to taking her to doctor appointments, he could always be counted on to assist with her needs.  Michael was in debilitating car accident in April 1995 and relocated to California in January 1996 to live with and be cared for by his sister and brother-in-law Paula (Treat) and Ken Duffy. Despite his disabilities Michael enjoyed a full life in California, helping Ken enjoy retired life, fishing and enjoying long car rides in the country. He had an incredible memory and would light up telling stories of growing up in Gallatin County and could also do great imitations of friends, family members, and of course Coach Bob Dallas. He was definitely a gentle giant and was greatly loved by all knew him. He handled his disabilities with grace and courage, could be counted on for a laugh and his joy for life was infectious.

Michael’s funeral service will be January 4th, 2021 at 1:00 PM with Pastor Billy Tanger officiating and interment will be in Pleasant Grove Cemetery in Elk Grove, CA.

Due to the Covid 19 pandemic, masks and social distancing is recommended.

In lieu of flowers the family will be accepting donations to place a bench in his honor at the Golden Living Center where Michael resided for the past six years. Please contact his sister, Paula Duffy (pa_duffy@yahoo.com) to arrange a donation.

To order memorial trees or send flowers to the family in memory of Michael Treat, please visit our flower store.