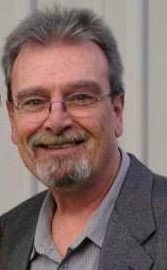 Michael Eugene Wathen, age 61, of Knoxville, IA passed away unexpectedly at his residence on Monday, October 9, 2017. Michael was employed most of his life as a warehouseman for various companies including Motorola and Des Moines Bolt. He was a long time resident of Mt. Pleasant, Iowa before moving to Knoxville in 2009.

Michael's wishes were to be cremated.  A graveside service will be held on October 28, 2017 at the St. Joseph Cemetery in Ridgway, IL.  Fr. Steven Beatty will officiate and those wanting to attend should go directly to the cemetery.

Notes of sympathy can be made to the family at www.coxandson.com or cards may be mailed to Lauren Petersen at 1876 1 st St, Tipton IA 52772 and/or Alexandra Wathen at 5787 Williamsburg Way, Fitchburg, WI 53593.

To order memorial trees or send flowers to the family in memory of Michael Eugene Wathen, please visit our flower store.
Send a Sympathy Card