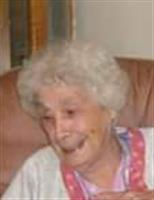 Mildred M. Dortch, age 95 of Galatia, IL but formerly of Shawneetown, died peacefully at the home of her son on Tuesday, June 23, 2015. Mildred was born on Feb. 28, 1920 in the Saline Mines Community near Shawneetown to the late Nathaniel and Ethel (Young) Brazier. She was a homemaker her entire life raising her family. She served her country in the Army during World War II as a Medical Technician. She was married to David Dortch in 1955 who preceded her in death in 1979. Mildred was known for her baking of pies and cakes, her beautiful quilts and especially her love for the St. Louis Cardinal baseball team. Mildred was a good wife, mother, grandmother, daughter, sister and friend and will be missed.

Visitation for Mildred will be on Friday, June 26, 2015 at the Cox & Son Funeral Home in Shawneetown from 5:00 PM to 8:00 PM. Her funeral service will at the funeral home on Saturday, June 27, 2015 starting at 11:00 AM with Rev. Scott Luckett officiating. Mildred will be buried next to husband in Westwood Cemetery.

To order memorial trees or send flowers to the family in memory of Mildred M Dortch, please visit our flower store.